The LoCo Brewfest Presents Some of Loudoun County’s Best 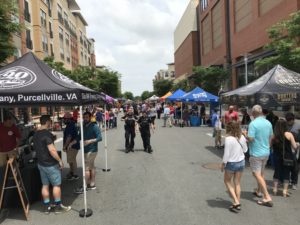 The event took place at Loudoun Station, which is mixed residential and commercial community with some great restaurants, shops, and residential living space.  The streets were closed to traffic, and festival attendees were given a glass and all the craft beer they’d care to taste from 24 of the finest craft breweries in Virginia.

There were some amazing beers on tap. All were good, but some were exceptionally good.  Here are some of the beers and breweries that stood out to me. 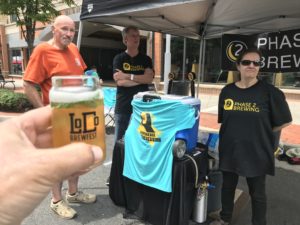 Phase 2 Brewing had a cream ale that was really good, then they dropped a crushed basil leaf in it and POW!  The flavor became even more intense and a little sweeter. Truly remarkable. When I asked what made them think to put a basil leaf in their cream ale they said, “That’s just how we roll.”

Lost Rhino Brewing had a dry Irish stout that could make you think you were in a pub in Dublin.

Not to be out done, Dog Money Brewery also had an Irish style stout that would make an Irishman proud.

Rocket Frog Brewing had a kettle sour that was the very definition of what a kettle sour should be. Pleasantly tart and sour, with a little sweetness.Many brewers are a little weary of brewing sour beers for fear of contamination from the yeasts used to make sours, and it can take significantly longer for a sour beer to ferment (a year or more verses 2 weeks for most ales). But more and more brewers are starting to experiment with sours. Good job Rocket Frog! 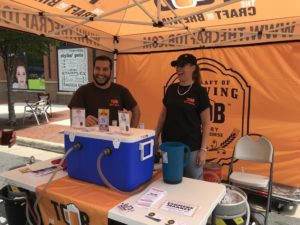 Of course, Rocket Frog wasn’t the only brewer there with a sour beer. The Craft of Brewing Brewery had a sour Hefeweizen that was truly exceptional.

Dirt Farm Brewery had a fruit forward ale with an amazing fruity aroma, with hints of apricots and peaches which carry over into the taste. So good!

Bear Chase Brewing isn’t open yet, but they were here at LoCo Brewfest giving everyone a preview of what they can look forward to when they do open in July. I understand their brewery will also include an Air B&B, and a spectacular view of the valley.  If their Pale Blue Yonder Pale Ale and Anarchy Ale are any indication of what we can expect when they open, I think they will be very, very, good. 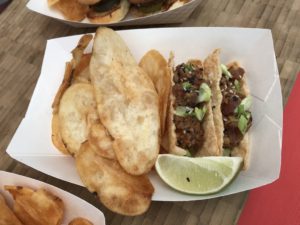 There are lots of restaurants in Loudoun Station. No matter what you are in the mood for, it’s there. Kababs, burger, sandwiches, pizza, or even bacon wrapped meatloaf, it’s there. I got ahi tuna tacos from The Zone, and they were so good, I had to go back and get them again.

This was a great event. The weather was nice, not too hot, with none of the expected rain. The beer was cold and delicious, and brewery owners and brewmasters were there to answer questions.

If you were there, you don’t need me to tell you what a great time you had. But if you were unable to be there, well, maybe next year?

Until then, may you have good health, and may your glass never run dry.