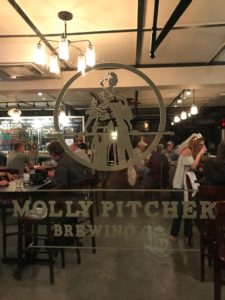 My final stop on the Cumberland Valley Beer Trail was Molly Pitcher Brewing. Named after the legendary Revolutionary War heroine who brought pitchers of water to colonial soldiers on the battlefield. Molly, who’s real name was Mary Ludwig Hays McCauley, famously jumped in to man a cannon during the Battle of Monmouth, earning the respect and admiration of those soldiers she fought with, and creating the legend of the fearless patriot in a petticoat.

This place had the feel of a true neighborhood pub. The staff greeted me when I walked in, and asked what I’d like before I sat down. Everyone seemed to know each other, but still made you feel like you were one of them. There was even a young woman there

celebrating her last night as a single woman with her maid of honor and bridesmaids. She’s the one wearing the veil in the picture above.

The place was accented with items from colonial America like a tri corner hat, a musket, and tap handles made from flintlock pistols and wooden beer taps.

The Patriot Pale Ale had a bright golden hue  with a fruity and floral aroma and a hint of citrus. The hop bitterness was nicely balanced by the malt with a touch of citrus. Delicious.

The Billy Haze-Jucy IPA had a hazy golden color and had a fruity/citrucy aroma, and a sweet but not too sweet tropical fruit flavor with a light citrus taste. Excellent.

Unfortunately, like all good things my time on the Cumberland Valley Beer Trail finally came to an end.  I had tasted some truly remarkable beer, had some good things to eat, and met some great people, but I was only able to visit a handful of the craft breweries on the trail, and sample only a tiny fraction of the beer. But that just gives me a good reason to come back, and something to look forward to.

Until next time, may you always have good health, and may your cup never run dry.

Note:
Since my visit to Molly Pitcher, they have moved to a new location just a few blocks away from their old location. All pictures above were taken at the old location.