A Special Place for Food, Fun, and Craft Beer, on the North Carolina Coast

Picture a sleepy, historic little coastal town that is seemingly trapped in time, with water front restaurants where you can dine on fresh seafood while watching the tide and the boats roll in and out. Then imagine miles of beautiful sun-bleached beaches and the sound of the waves as they roll across the sand, then slip back out to sea.

I’m not talking about some Caribbean hid-a-way. I’m talking about the Crystal Coast. Beaufort, Morehead City and Emerald Isle, in North Carolina.

The coast of this little area is also known as the ‘Graveyard of the Atlantic’, and is a scuba divers wonderland with a dizzying array of ship wrecks and artificial reefs, fish, and warm clear waters.

But there is even more to love about this place than the little waterfront town of Beaufort which was once home to the infamous pirate known as Black Beard, the restaurants in Morehead City built right on the docks where the fishing boats return with the freshest seafood, or even the miles of beautiful sandy beaches in Emerald Isle.

The Crystal Coast is also a fantastic place for craft beer.
I spent last weekend enjoying as much as I could in this special place. Arriving on Friday, I enjoyed a walk through the town of Beaufort and along the treelined walkway beside the docks of the waterfront, watched the boats coming and going, and enjoyed the breeze coming in off the water.

I then stopped by Fishtowne Brew House, located just a block from the waterfront, and enjoyed their Gose Down Easy, Andromeda Pale Ale, and a delicious sandwich from Turner Street Market right next store. 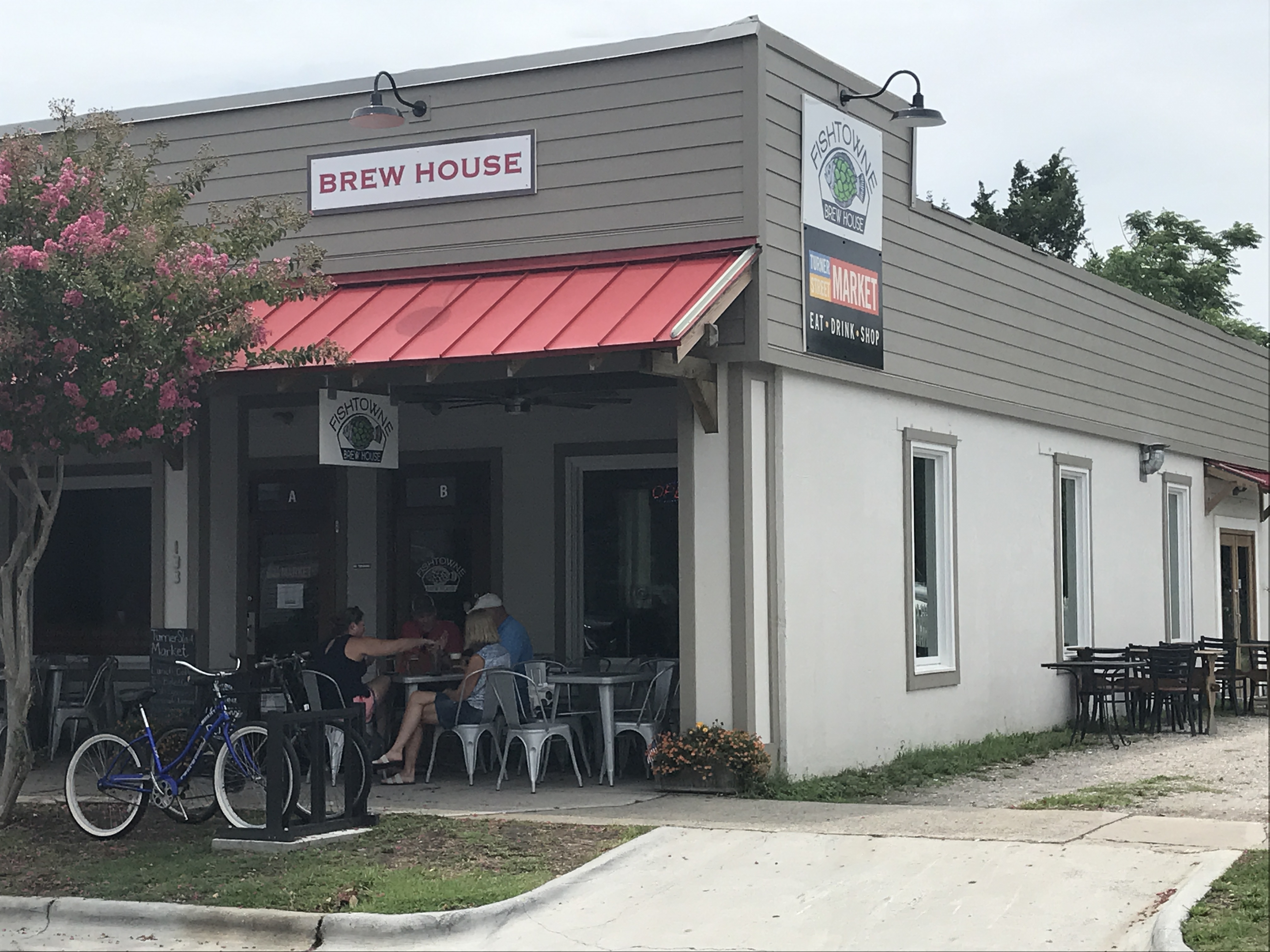 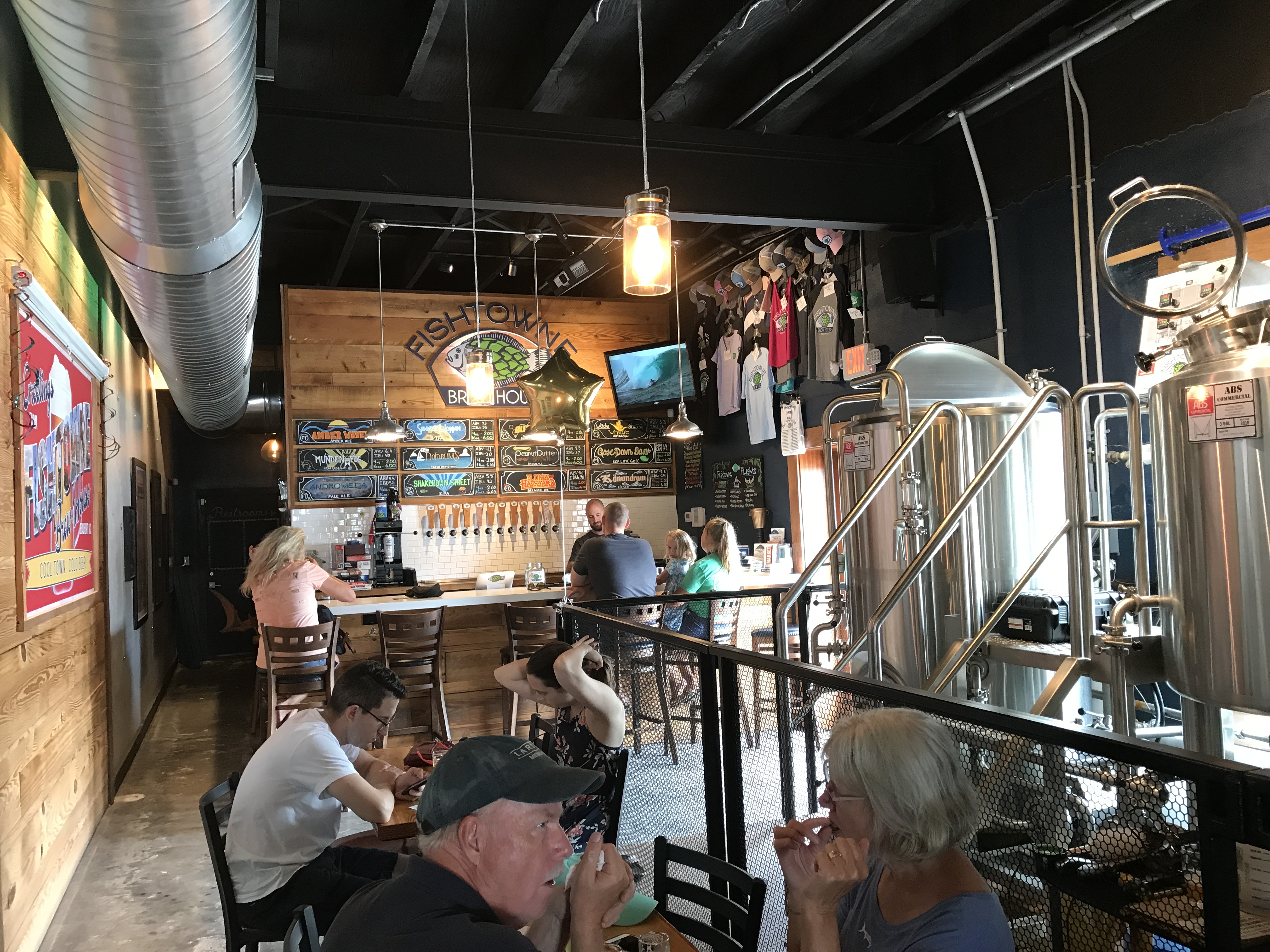 The Fishtowne Brew House and Turner Street Market are located in the space formerly occupied by The Net House Restaurant & Oyster Bar. And while I am sad that the Net House is gone (it was one of my favorite seafood places in Beaufort) I am comforted by the fact that it was replaced by what are sure to be two of my new favorite places.

Next, I visited Mill Whistle Brewing, a Nano brewery located on the site of the 100-year-old Safrit Lumber Mill which closed in 1970s. They run a 1 beer barrel brewing system which allows them to produce a wide variety of beer styles. When I stopped by, they had eight of their own beers on tap as well as six guest taps. 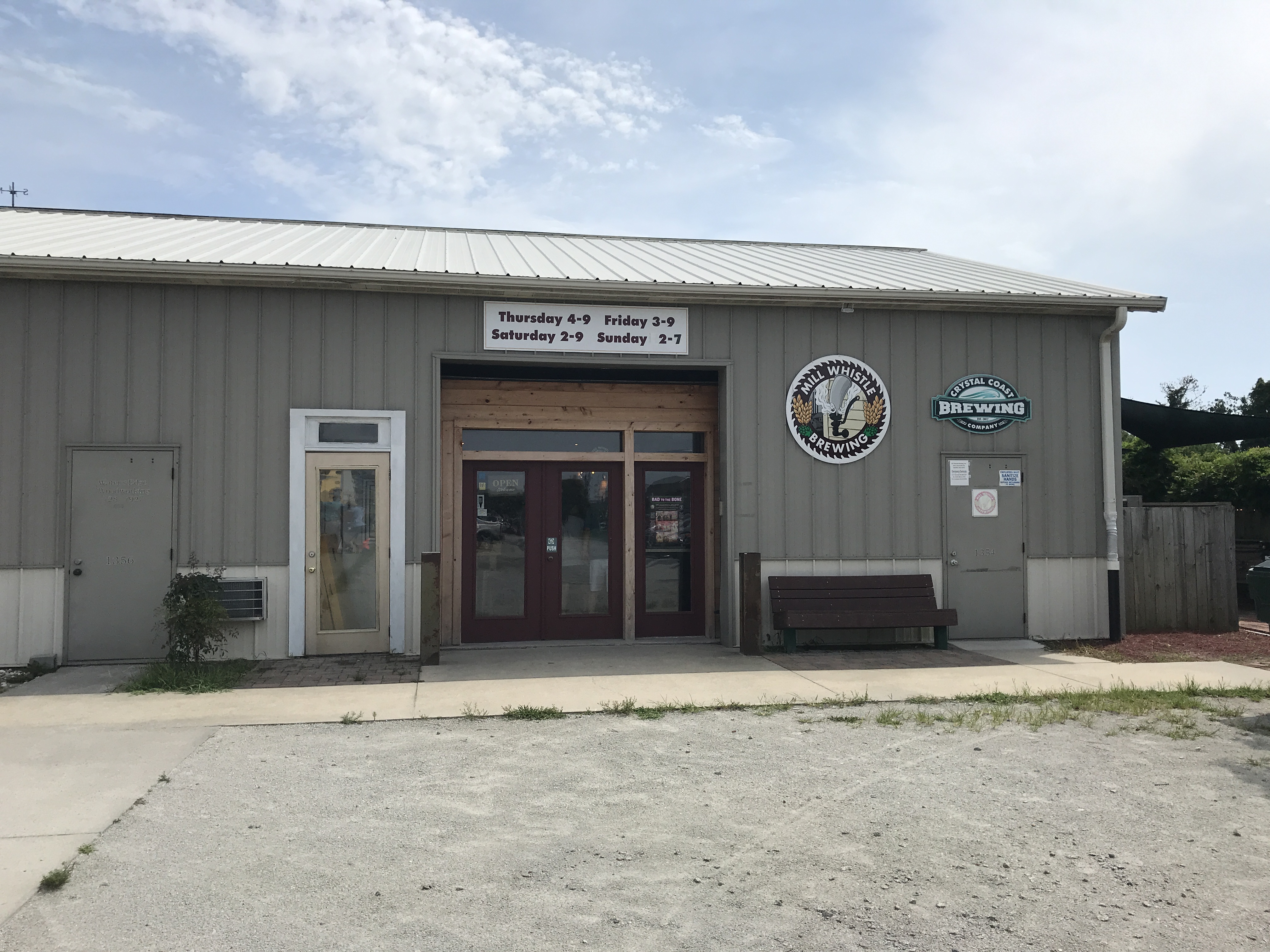 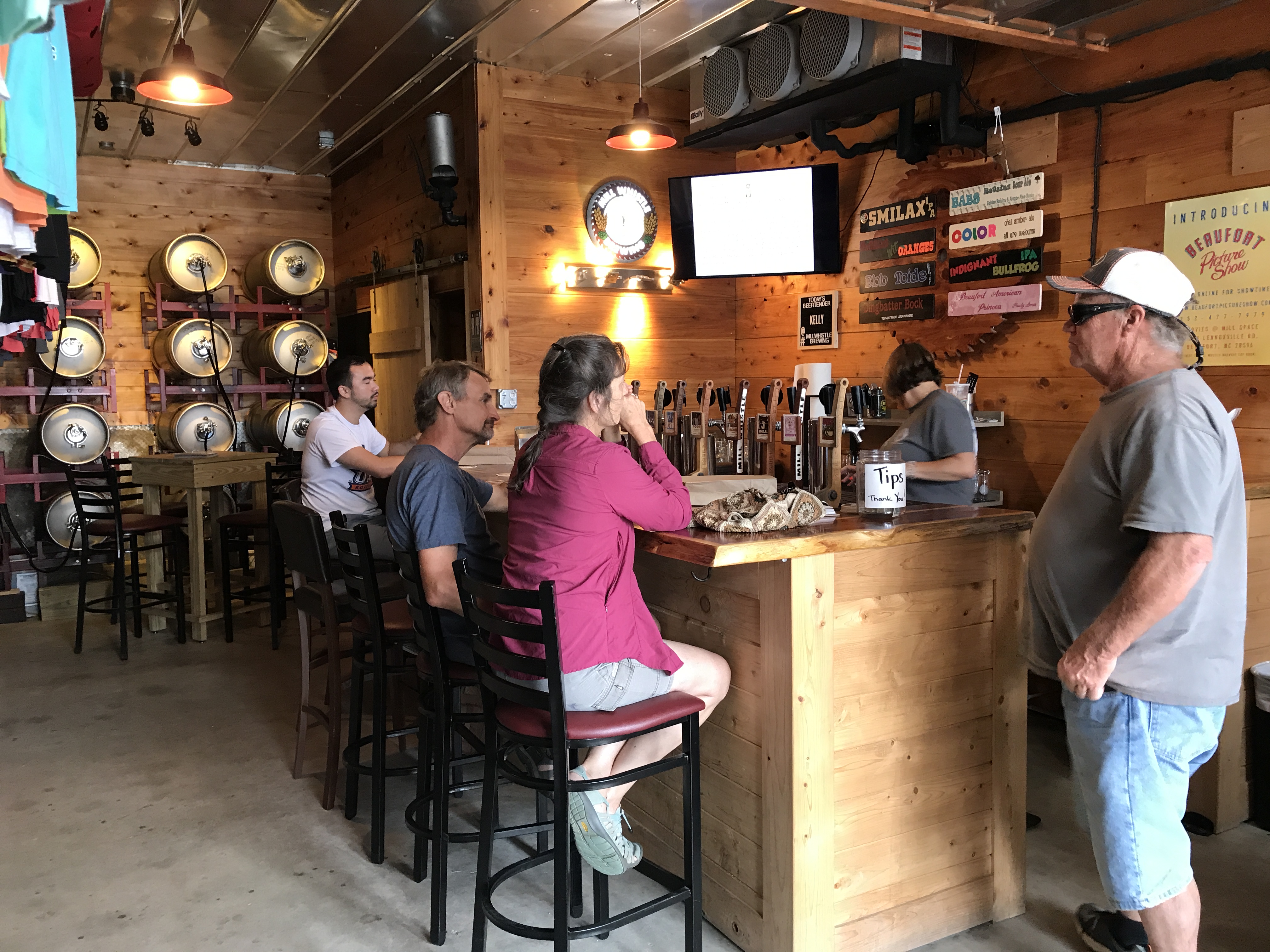 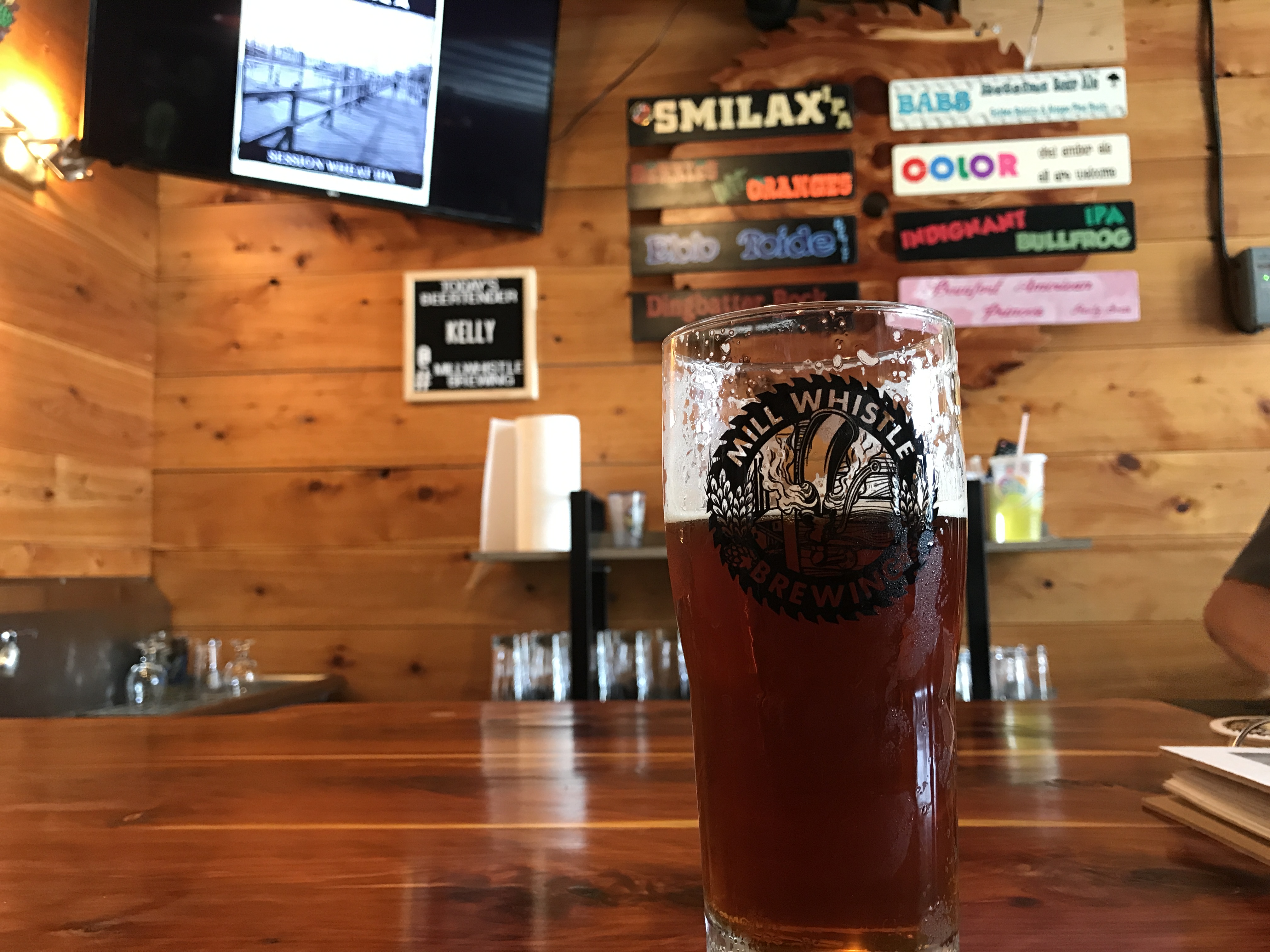 I sampled the Indignant Bullfrog IPA, the Babs Retsina Sour Ale, and the Color Chai Amber Ale. Each was an excellent representation of their style with vibrant and complex flavors. The Babs was especially good sour ale. Where some can be excessively dank, it had a nice tartness which was balanced out by a semi sweet malty backbone.

Kelly, my bartender, was quite knowledgeable about the beers on tap and was happy to talk about them, the former mill, and even the movie playing next door. By the time I left felt like we had known each other for years. Great beer, great company, and a warm, friendly, and inviting atmosphere.

The next morning while walking down to the waterfront for a cup of coffee I passed by the Farmers Market in the courthouse square, where I purchased some fresh baked pastries for my breakfast, some delicious hand-made cheeses, and even a couple of pounds of fresh, locally caught steamed shrimp for later. 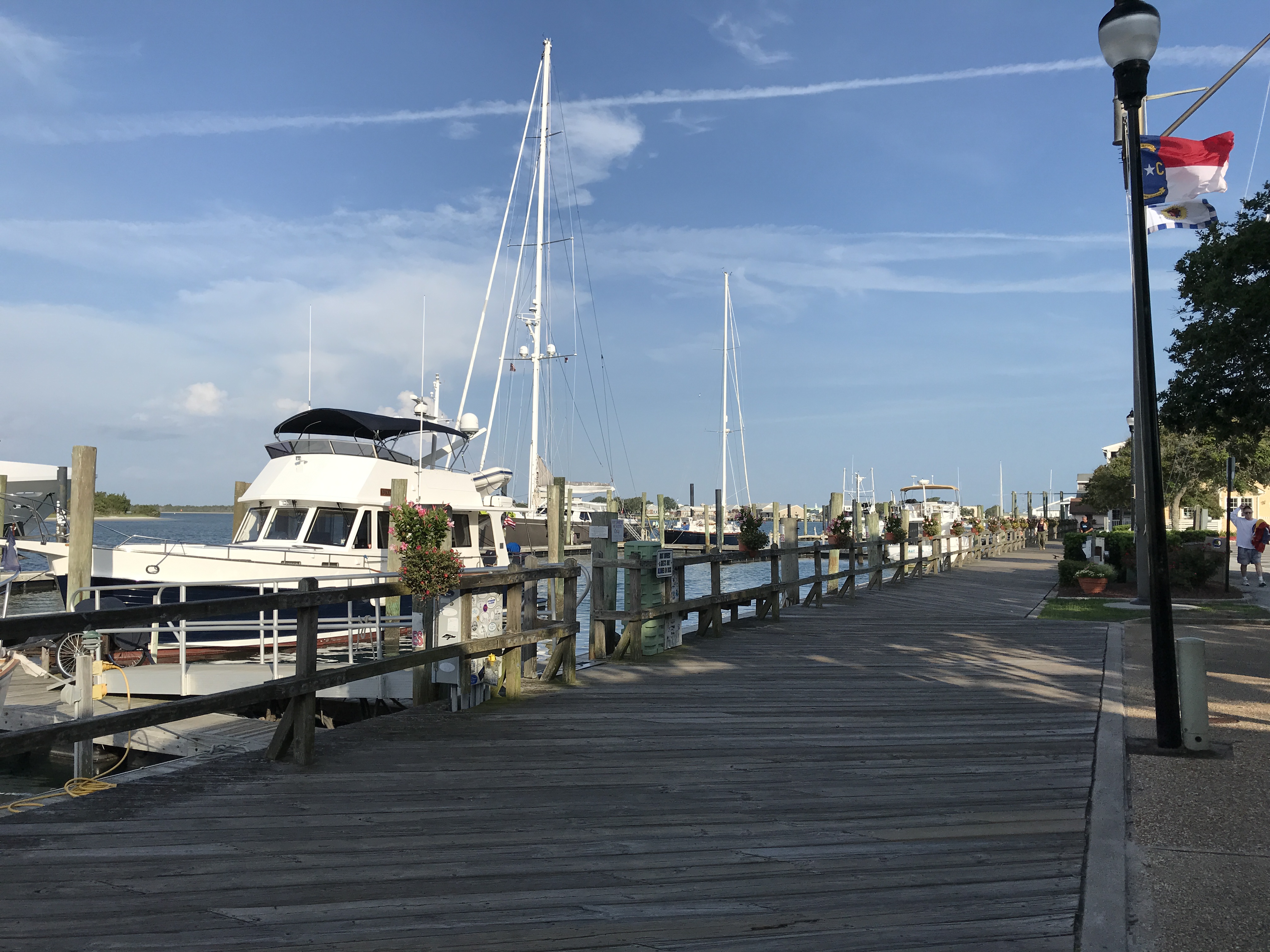 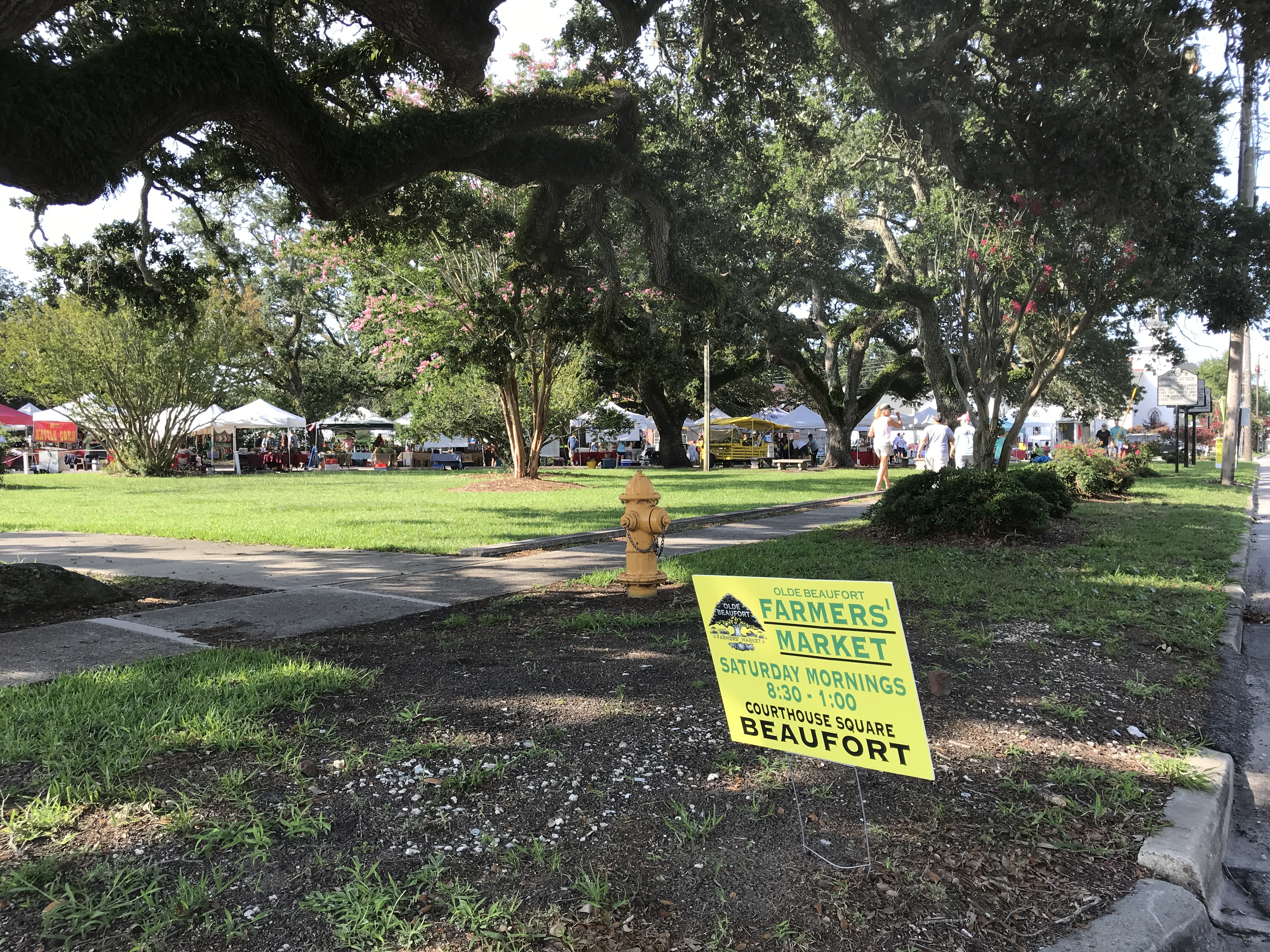 Around lunch time I headed over to Morehead to visit Tight Lines Pub and Brewery. Unfortunately, Tight Lines was closed and undergoing major renovations, but I consoled myself by having lunch at Shuckin’ Shack Oyster Bar right next door. The blackened scallops were phenomenal, and the lobster roll was delicious.

I continued on from there to Crystal Coast Brewing, just 2 blocks off Atlantic Beach on the north end of Emerald Isle. 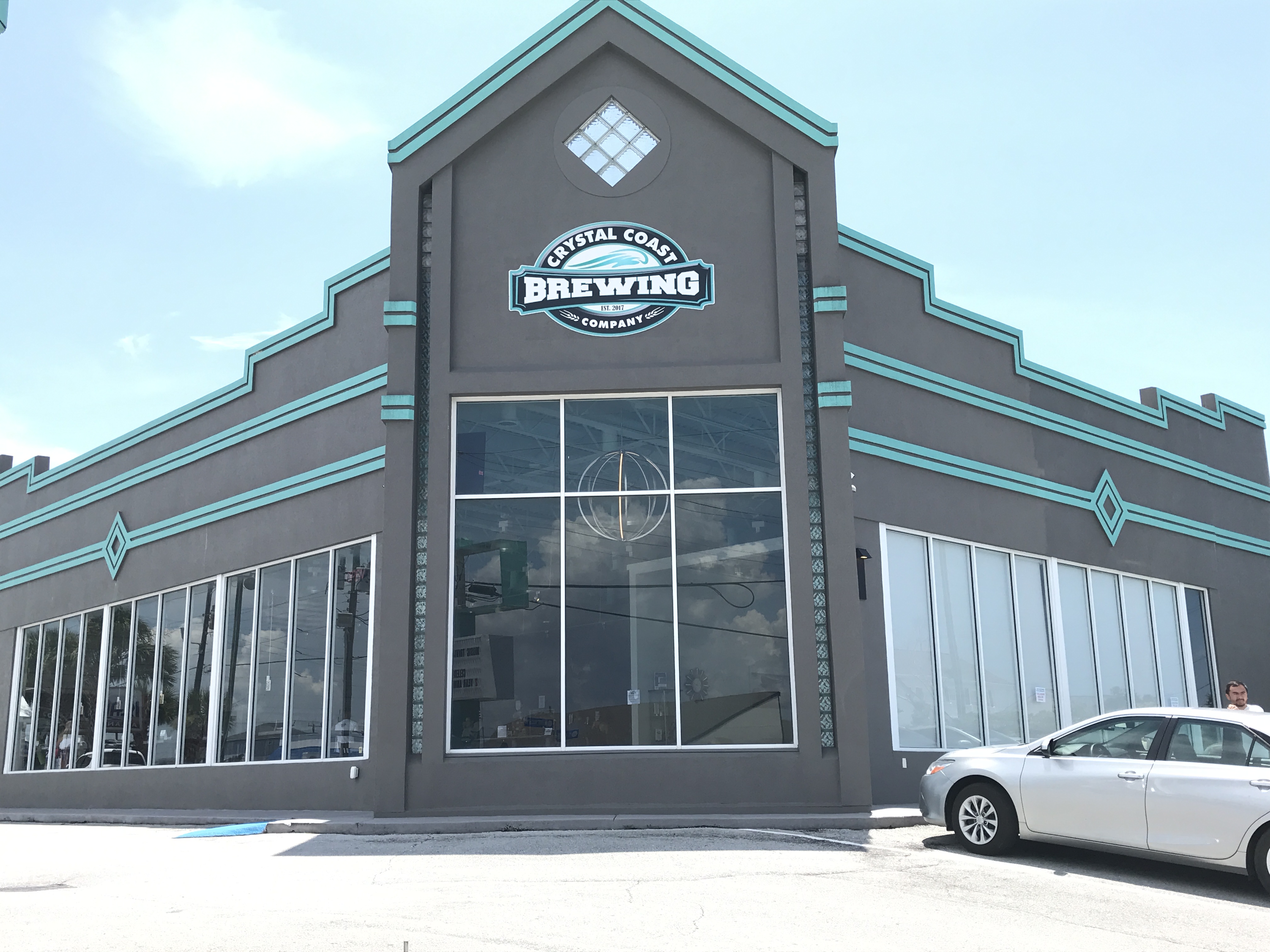 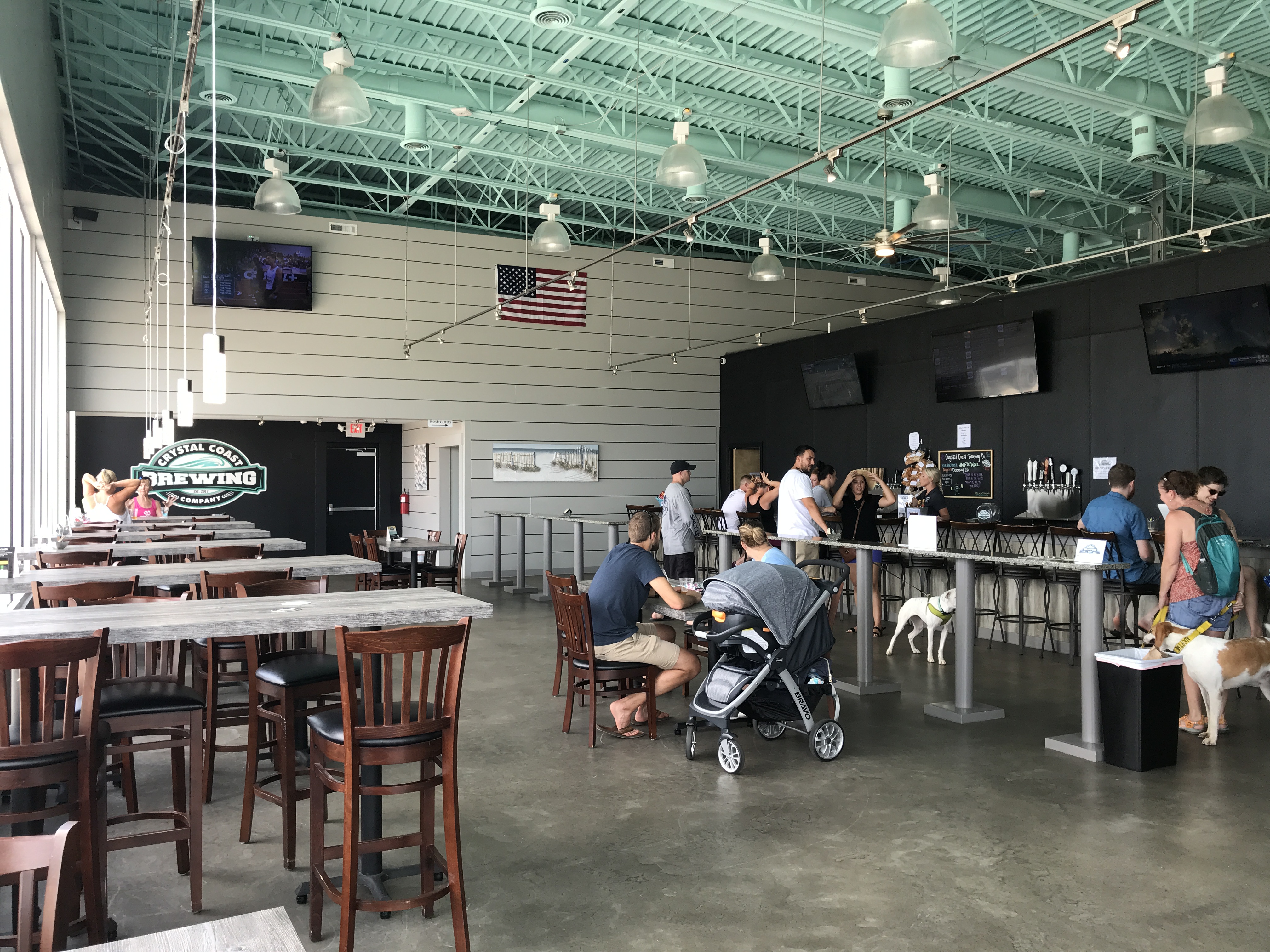 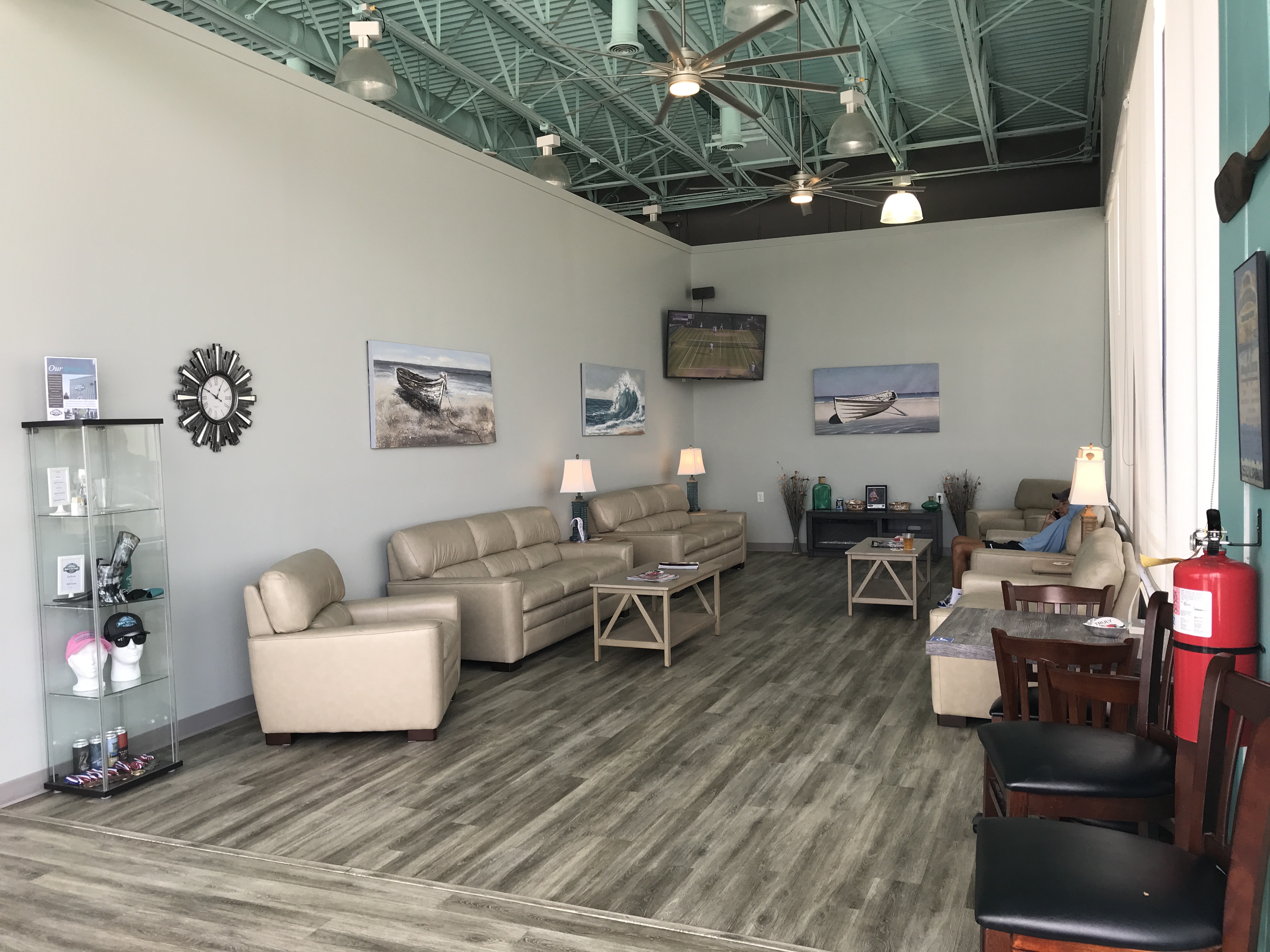 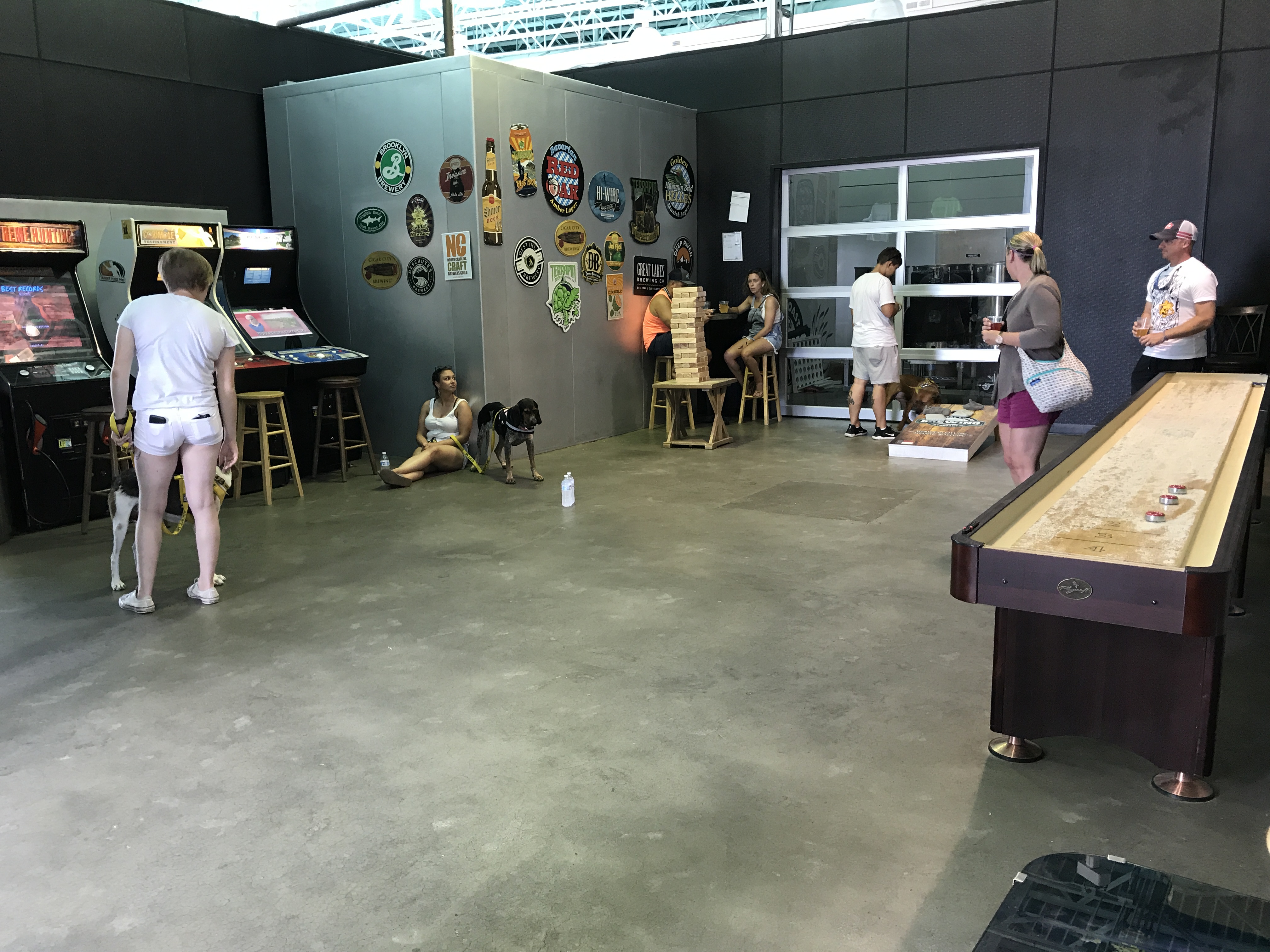 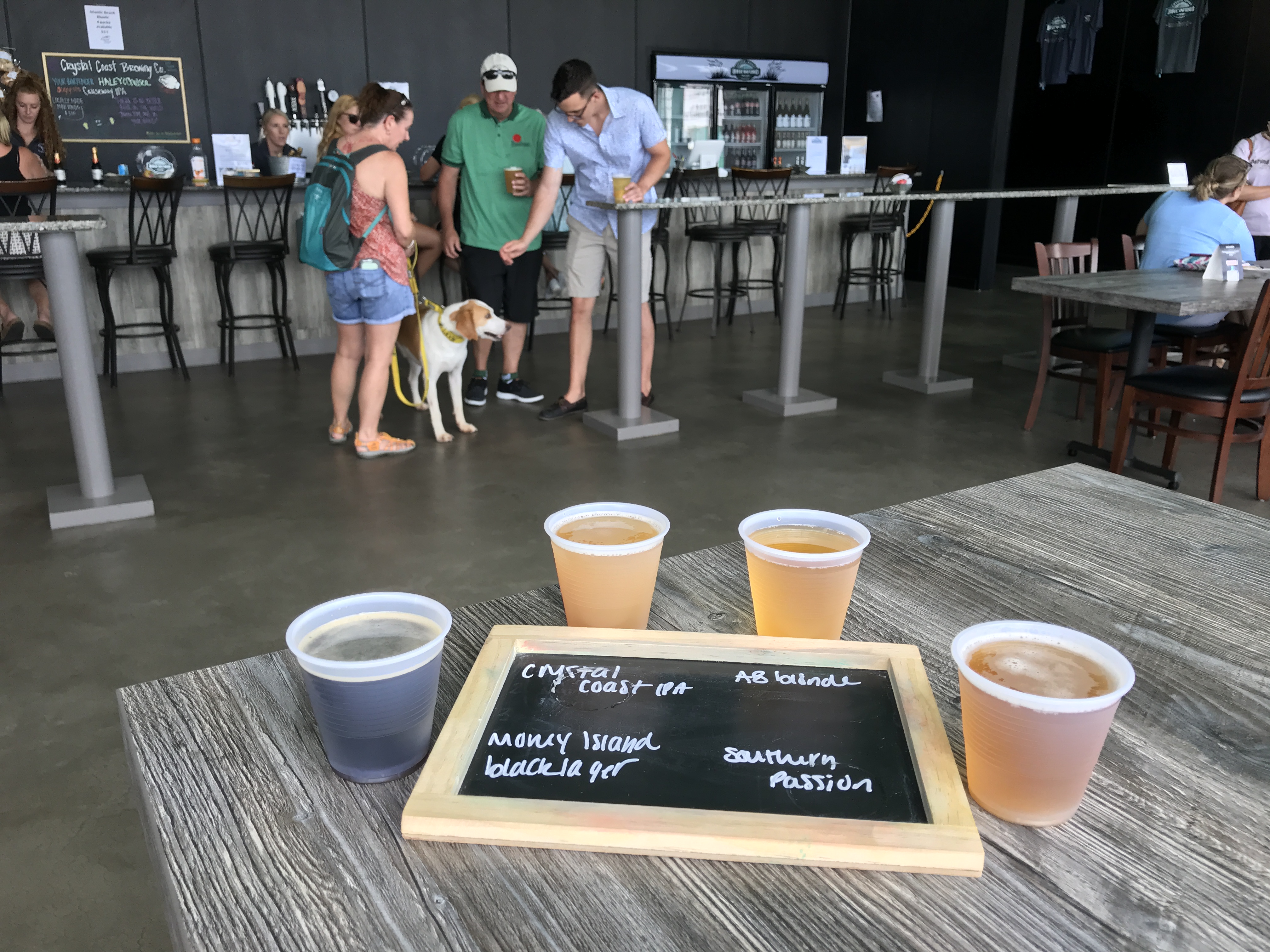 This place was amazing. In addition to a big, wide-open tasting room, they had a lounge area, and a game room. They were hosting an adoption event for dogs needing families, so there were some amazing dogs there just begging to be played with.  I love dogs, and have two of my own. I’m not sure how I managed to leave without another furry companion.

The beer there was as unique and noteworthy as the place in which it was served. I though it was a little strange that they served their beer in plastic cups, however a sign on the wall explained that the county requires them to use plastic cups because they fear the water use required to was glassware would overtax the limited capacity of the island’s septic system. Regardless of the serving vessel, they had a variety of beer styles and they were all cold and delicious. I sampled their Crystal Coast IPA, Atlantic Beach Blonde, Money Island Black Lager, and Southern Passion Pale Ale.

After a little time in the sun, on the sand, and in the surf of Atlantic Beach, I took a short drive out to Shortway Brewing in Newport, NC. 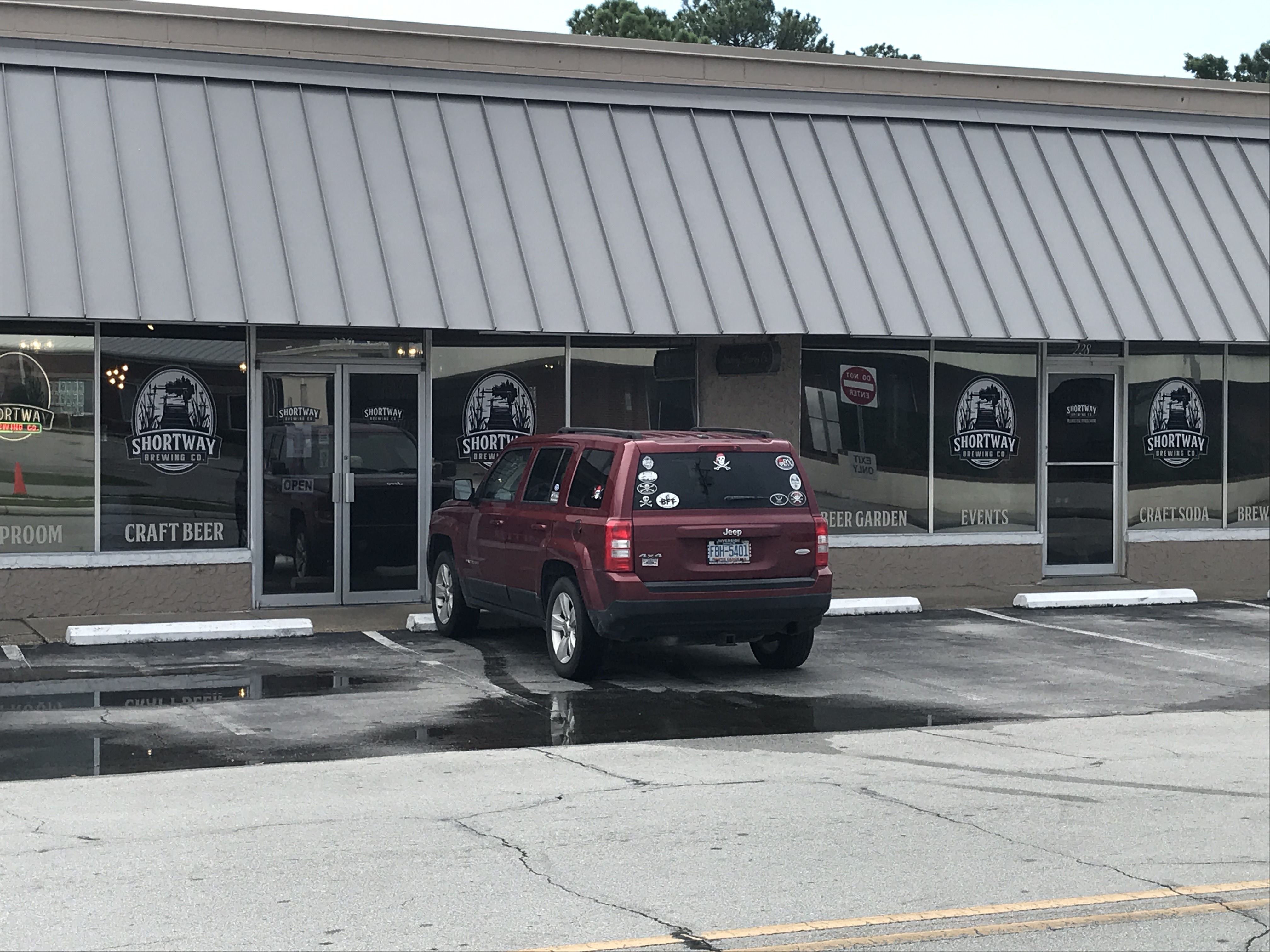 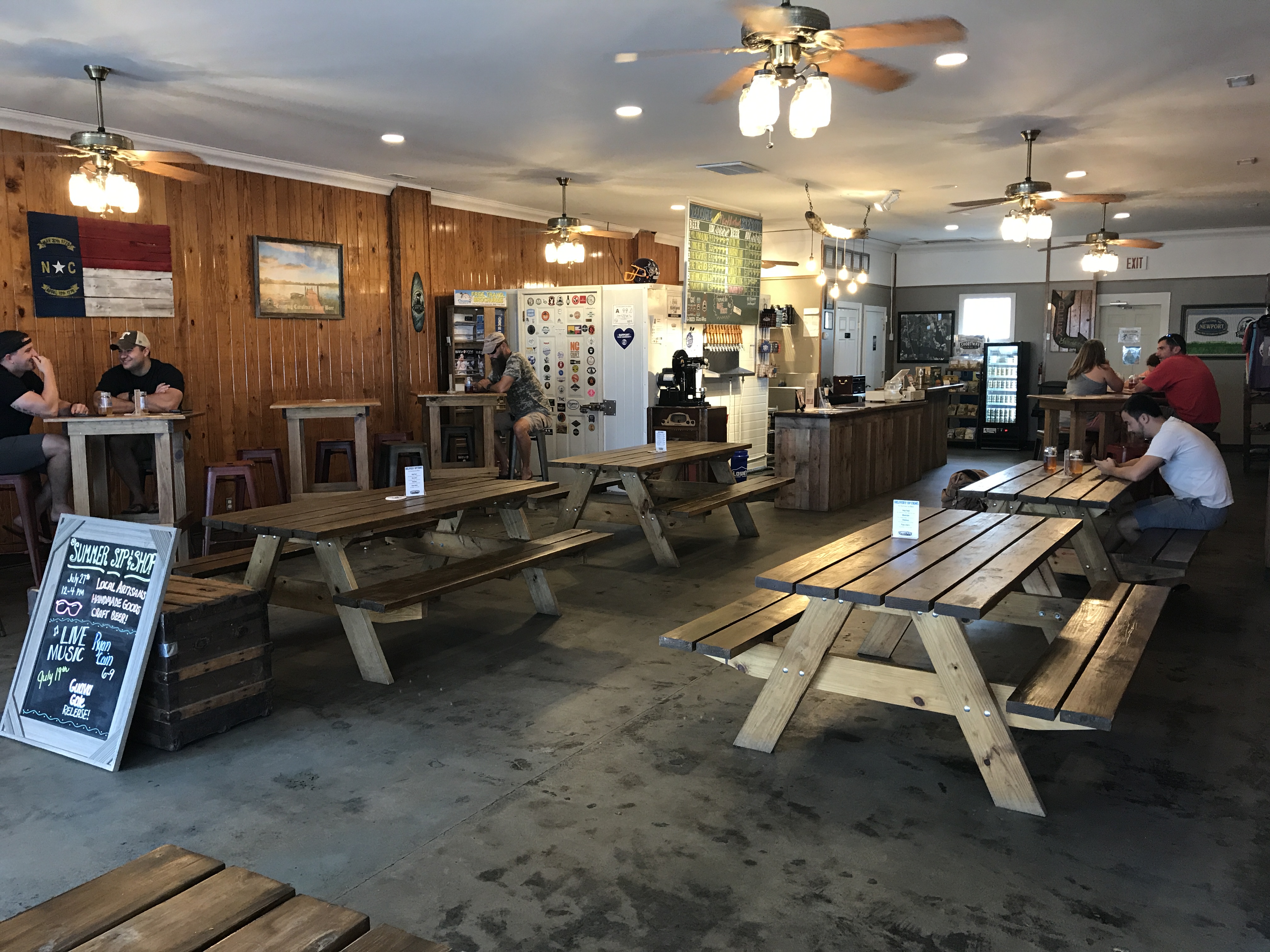 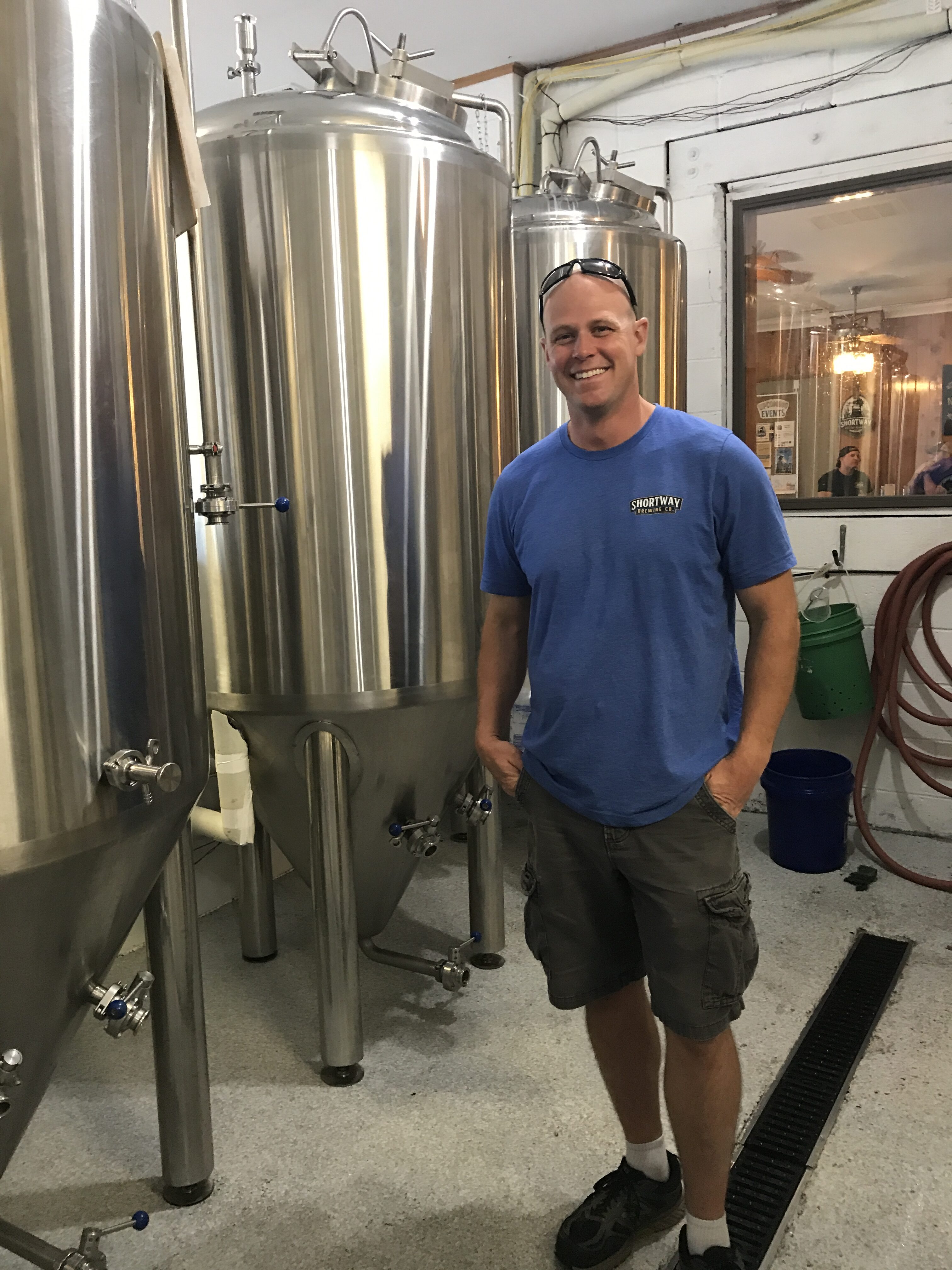 A ten-year veteran of the Marine Corps, Mat Shortway and his wife Lindsay founded Shortway Brewing, opening its doors in October of 2017. Mat is not only one of the owners, but is also the brew master. He takes great pride in brewing fantastic handcrafted beers using locally sourced ingredients, and his love for his craft shows in the wide variety, as well as the quality and taste of every beer on tap in his tasting room.

I had the Spring Bee Pale Ale, the Rip Tide Lime, and the Down East IPA – all showcasing the skills of Shortway’s brew master. Before leaving, I picked up a six-pack of their Down East IPA to enjoy later.  Interestingly, Down East is brewed with Triticale, a hybrid of wheat and rye. While there are a few other brewers who use triticale in their beer, Shortway’s Down East IPA is apparently the only one brewed using triticale as its primary grain. And the taste? Well, like I said I took some with me when I left. 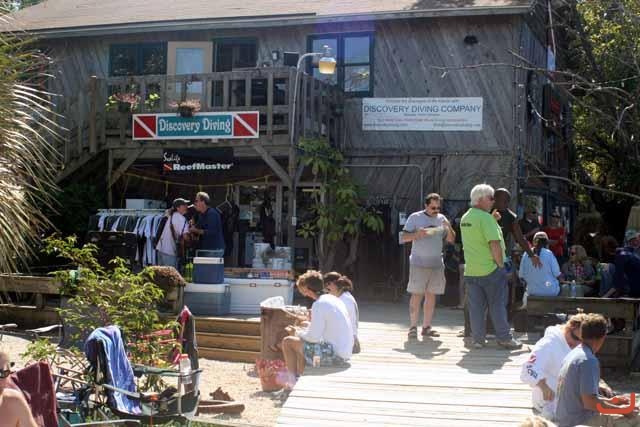 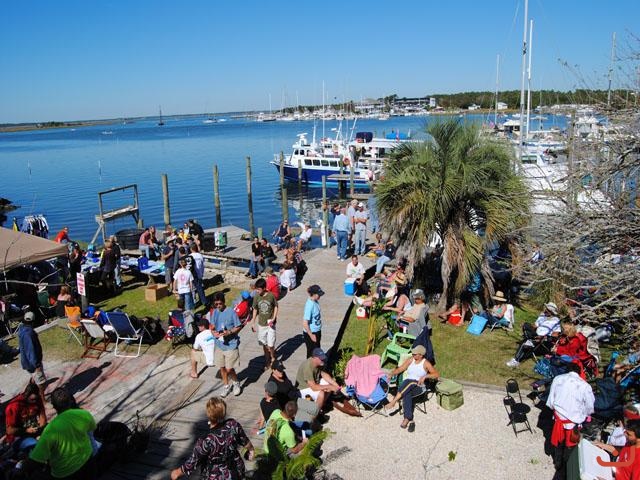 Sunday morning I shipped out on the Outrageous V out of Discovery Dive shop in Beaufort for a day on the ocean, scuba diving on a couple of the inshore ship wrecks. The warm, clear waters off the coast washing the tension and stress of every day life as schools of fish swirled around the ship wrecks on the bottom of the ocean, granting peace and serenity to the soul as you drifted effortlessly over broken decks and the sandy bottom.

Once we were back underway and on our return trip to the dock, I shared the six-pack prize I acquired at Shortway Brewing the previous evening with a few of my fellow passengers, who enjoyed it as much as I did. What a great way to end a day.

When the Outrageous V was once again docked at Discovery Diving, my weekend getaway to the Crystal Coast of North Carolina was at its end and it was time to go home. As sad as I was for the weekend to be over, I could still take comfort in the knowledge that I will come back. And hopefully, Tight Lines Pub and Brewery will be open when I do.